Not everyone gets to spend Christmas Eve patiently anticipating St. Nick. 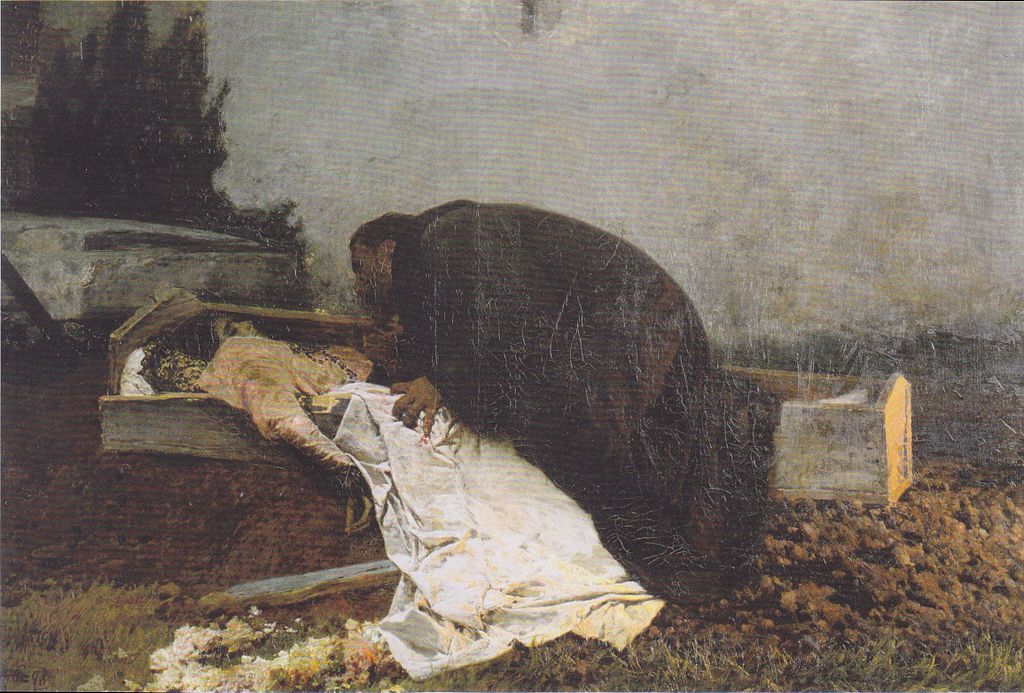 Jacob McKean scowled but thrust his spade back down into the earth.

With the night concealing their illicit deed, both men shamelessly removed dirt from the grave. Charles Penn feared the cold ground of the graveyard may present a challenge, but the first few days of winter had proven merciful – the earth had not yet frozen. Only one lantern illuminated their clandestine endeavor, but the soft glow of the moon allowed each man to see the bottom of the deepening hole.

Madeline Penn had rested in her grave for only three short weeks before her husband decided upon this nefarious exhumation. There was no doubt to Jacob McKean that Penn was painfully eager to see his wife – albeit for apparently devious reasons.

“Only another foot or so,” Penn offered between heavy breaths. His comment sought to reassure his tired upper body more so than his hired help.

“Climbing out of here isn’t going to be so easy,” McKean grunted.

Charles Penn was aware that his associate was becoming more sober by the minute. If McKean fully regained his senses, he would undoubtedly ask many, many more questions. Penn had purposefully plied the younger man with whiskey several hours earlier at a nearby tavern. The alcohol had made McKean much more agreeable and eager to earn a few coins despite the holiday.

McKean didn’t respond. He only wearily sighed and kept digging.

“Trust me,” Penn continued, “I am sure that the necklace my wife was buried with will collect a small fortune. Your share will be worth your labor and more.”

“I hope,” McKean groaned. “Those couple shillings would have otherwise never got me tonight.”

Of course, there was no necklace. The Penns owned very little of value. If the family had possessed such a prized item, the piece would have been sold and not buried. Charles Penn was left with three small children to care for at home after the fever took his wife. Any opportunity for extra financial support would have been readily seized.

Charles Penn had another motive for his Christmas Eve exploits. This reason was potentially far more sinister than that of an ordinary grave robber. Although Penn kept his observations to himself, he was certainly pleased the grave appeared undisturbed. That eased his nerves somewhat.

A hollow thud announced McKean’s spade striking an object at the bottom of the grave. This was no rock or hardened clump of soil.

“The coffin!” Penn shouted with relief. He immediately recoiled, fearing his proclamation was too loud.

“Sounds to be the lid,” McKean replied. He dropped down onto his knees and raked the remaining soil away with his hands.

“I’ll dig around the coffin,” Penn said as McKean returned to his feet. “Can you climb out and retrieve my sack?”

Jacob McKean glared at his temporary employer. Charles Penn was a rotund man and climbing out of the grave would undoubtedly be a challenge for him.

Penn carefully dug a trench around the coffin, providing a place for the two men to stand. McKean scurried and scrambled up one side of the grave and momentarily disappeared before descending back into the hole with Penn’s mysterious sack. McKean dropped the sack down on the coffin.

“My apologies,” Penn offered with a weak smile, “but we’ll also need the lantern.”

McKean sighed and shook his head. He clamored back up one side of the grave and carefully returned into the grave with the lantern.

“Would you be kind enough to hold the lantern?” Penn asked.

McKean nodded and held the lantern over the coffin. Penn finished the trench, wiped a sleeve over his forehead, and lowered the sack down next to his feet. He opened the sack and carefully removed an iron pry bar, hammer, and pistol.

McKean immediately stepped back upon seeing the pistol, suspecting that a double-cross was afoot. He was very surprised when Penn calmly handed him the firearm.

“Just in case there is any trouble,” the widower explained.

Charles Penn positioned the pry bar under the coffin lid and carefully hammered the bar inward. He repeated this process numerous times. McKean moved with the lantern to illuminate wherever Penn was hammering. The stout man worked slowly but with great precision. After carefully dislodging the nails, Penn returned to his sack and crouched down into the trench as low as possible.

“Now, be ready for anything,” Penn warned in a whisper.

McKean looked upward, supposing that Penn suspected someone was approaching the grave. Only a patchwork of stars, a pale moon, and the looming spire of St. Dymphna’s Church were visible, but he cautiously pointed the pistol toward the opening above anyway.

“No,” Penn said sharply. “Down here.” The older man pushed the iron bar under the coffin lid. The bar easily slid inside. “I’m going to lift the lid on the count of three.”

McKean steadied the pistol at the coffin, grateful that he was no longer seeing double.

McKean raised the lantern as high as his left arm would allow.

“Three!” Penn shouted. With one forceful motion, Charles Penn thrust his body forward and the wooden lid flipped off the coffin and tumbled against the legs and feet and his associate.

Neither man said a word. Both took a long, silent minute to assess the contents of the pine tomb.

The sides of the coffin and underside of the lid were gouged with deep, rough marks. There were also a few small, dark stains visible.

The bottom of the coffin appeared to have similar marks, but this could not be discerned for certain because most of the bottom wooden panels was missing.

There was no body – only a circular, jagged hole in the bottom of the coffin.

Charles Penn leaned over the coffin and lowered one end of the iron pry bar into this hole, which extended into the cold earth beneath.

There was no obvious bottom. The decaying remains of Madeline Penn had not merely slipped through inferior wood or poor craftsmanship into the muddy recess of the grave.

McKean lowered the lantern toward the hole. The golden light illuminated an apparent tunnel extending below the coffin.

Charles Penn hadn’t suspected this particular outcome, but he wasn’t necessarily surprised either. His children had come to him each of the last several days explaining that their mother had visited them at various places and times. She wasn’t quite herself, but each of the children had been mostly pleased to see her.

Penn initially wrote this off as nothing more than young hearts pining for their lost mother. However, one of the children from the neighboring farm went missing soon after his children reported the first ghostly encounter. The father of that child had also claimed to see the undead Madeline Penn scurrying about on her hands and feet as if she were some type of animal.

“Where the hell does this go?” McKean asked.

Charles Penn carefully read the face of Jacob McKean in the dim light. He understood that McKean hadn’t the slightest idea of what the pair had found.

Penn next thought of his children, each snug in their beds just a few miles from the graveyard and, that very moment, under the watchful eye of his sister. His children were anticipating a visit from St. Nicholas that night, and he suspected many of the neighboring children were as well. He imagined a fiendishly resurrected Madeline descending the crumbling masonry of a chimney or two in place of the jolly, old saint.

“Grave robbers,” Penn said dutifully after mulling over the circumstances and possibilities. “The rascals have beaten us.”

“The thieves took the entire body?”

“However, I don’t doubt this tunnel does lead somewhere,” Penn speculated. “Perhaps even to the scoundrels’ lair.”

A cold, dank gust of air lifted out of the tunnel.

Penn was silent for a moment and then made a fateful offer.

“Mr. McKean, how would you like to earn an additional five guineas?”

Joshua Scully writes speculative fiction and can be found @jojascully.