“Dying for Dinosaurs” originally appeared with Evening Theatre (defunct publication) in August of 2018. 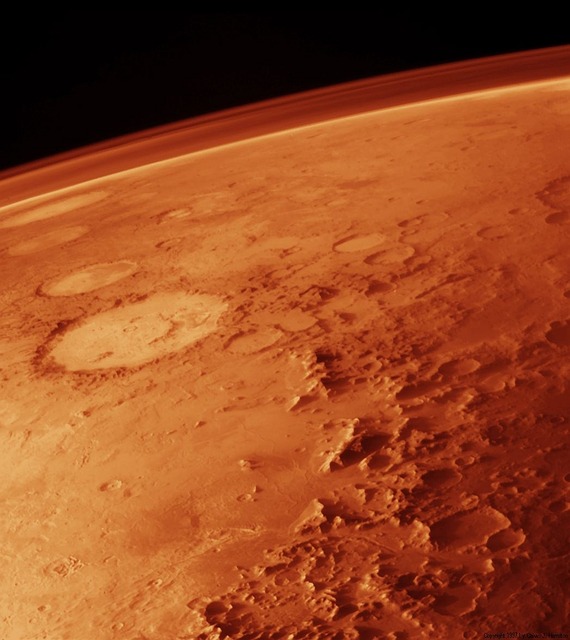 Paleontologist Alma Ojeda was a veteran of countless excavations in her native country. She had established herself quickly in her field when she helped to unearth the largest Argentinosaurus ever found while working on her doctorate at the University of Córdoba.

However, Argentina was literally no less than a world away from Mars, and this was her first dig on the surface of the Red Planet. Ojeda found this distant location offered both new benefits and challenges.

Due to the weaker gravity, tools and equipment were easily moved on the Martian surface. The ancient rock and sand lifted away from the desertscape without much difficulty.

On the other hand, her pressure suit made nearly every movement awkward and uneven. There was also an ever-present need to change oxygen canisters. Temperamental dust storms kicked up with alarming frequency, often obscuring progress.

The good and bad attributes of this particular project aside, Ojeda was certain her colleagues back on Earth – some sixty million kilometers away – could hear her shout with ecstasy when history changed before her eyes just west of Ascraeus Mons.

Peter Harland, the mission commander and Alma Ojeda’s excavation partner, turned away from an aluminum sifting apparatus and covered the distance to Alma in several careful strides.

“Vertebrae,” Ojeda whispered. “Nearly identical to the images taken by the rovers.”

As she spoke, whirling dust from a butterscotch sky partially covered the discovery.

“And this is why we’re here,” Harland muttered. “The rovers just aren’t quick enough.”

Moving his satchel of tools closer to Ojeda, Harland tossed aside a mattock and selected a small trowel from the sack.

“I almost can’t believe how near this is to the surface,” Harland commented.

“Look!” Ojeda exclaimed again. She worked a small brush over a final vertebra to reveal the base of a skull. Harland eagerly joined her. The pair carefully worked crimson rock away from the find.

Harland paused momentarily to press a small button on the side of his helmet. This temporarily boosted his transmitter.

“Quinlan, I’m sure you’re reading us?”

Michael Quinlan, the communications officer and pilot, replied almost immediately from the observation compartment inside their lander.

“I’ve heard everything,” Quinlan answered in a clear voice. “I’m suiting up now to come out and have a look for myself. I should be there in twenty minutes.”

As the paleontologists eagerly revealed more of the skull, both took a moment to speculate.

“Therapod?” Peter noted as he traded the trowel for a chisel from his satchel. “What do you think?”

“Allosaur?” Ojeda responded with a question of her own.

“I told you about that site I worked at in Oklahoma as part of my training,” Harland replied. “We found a nearly complete Saurophaganax. The similarities are striking.”

“The panspermia school back home is going to get quite a boost,” Ojeda added. “Convergent evolution to an extreme.”

“Right,” Harland affirmed, “and I don’t remember Genesis saying anything about God sending life to Mars, either. Regardless, convergent evolution for certain. Some folks back home are going to be awfully angry.”

Both paleontologists–turned–xenopaleontologists scowled at this thought. The most ardent detractors of their mission to confirm the potential existence of fossilized remains on the Martian surface were the Abramaic Purists. These religious fanatics had created a powerful political organization and were very hostile to the notion of extraterrestrial life.

As Ojeda and Harland continued their work, a complete fossilized creature began to take shape. Their discovery would have looked perfectly at home if unearthed in Alberta or Montana, but somehow seeing the bones against the red rock and muddled yellow sky made the pair somehow uneasy.

“Aside from the obvious, this completely changes everything we know about the Hesperian and Amazonian periods,” Ojeda remarked concerning geological periods on Mars. “Processes could have brought this to the surface, but I have a feeling this is early Amazonian.”

“Imagine the fallout,” Harland replied. “Most texts about this planet back home might as well be used for kindling.”

Ojeda nodded and carefully used a small brush to remove fine extraterrestrial soil from the teeth of a carnivorous dinosaur that had once roamed the coast of an ancient Martian sea.

“Amazing,” Ojeda observed quietly. “I can’t imagine what this planet is hiding.”

“I can’t either,” Harland agreed.

The voice of Michael Quinlan suddenly sounded inside the helmets of the two enchanted academics. Quinlan stood just a few feet away. His outstretched arm wasn’t offering a fresh oxygen canister or spare trowel. The pilot instead firmly held the single emergency firearm from the lander.

Surprised by the sudden and threatening appearance of the pilot, Ojeda dropped the brush and fell backward in a small cloud of dust.

“What the hell?” Harland asked flatly as he pushed himself off the ground. He formed two gloved fists as he fully stood. “Drop that!”

“Both of you need to come back to the lander with me now,” Quinlan ordered. “I’ll put you in stasis. We’re returning to Earth.”

“What are you talking about?” Ojeda asked. “That’s insane! Do you realize what we’ve found?”

“I realize exactly what you found, and the agency knows some back home aren’t ready for this,” Quinlan calmly offered.

“I doubt the agency has a problem,” Harland countered.

Quinlan shrugged and offered a slight smile. He pointed the firearm squarely at the mission commander.

Harland took a small step forward toward the pilot. Quinlan stepped back.

“Peter, you don’t have to die out here,” Quinlan warned, “but I have permission to shoot both of you if necessary.”

“I don’t understand,” Ojeda stammered from behind Harland. She was still on the ground, crawling around the discovery as if she meant to shield the find from Quinlan.

“You both need to come with me,” Quinlan repeated. “In the event of a discovery of this magnitude, I was to return both of you to stasis immediately. The agency needs time to assess this situation.”

“Like hell!” Harland barked. “I didn’t risk my life to be a footnote on some conspiracy theory!”

“Stand back!” Quinlan shouted before retreating another step.

Launching each arm into motion, Harland released two handfuls of sand toward Quinlan as he charged forward. The rusty cloud bought the commander the necessary second that he needed to reach out for the firearm.

Quinlan turned to shield himself, and the two men struggled as much as the gravity and their pressure suits would allow. The firearm discharged into the ground. The sound from the blast traveled with leisure through the thin Martian atmosphere.

After another discharge, Quinlan managed to twist out of Harland’s grasp, sending his commander slowly to the ground. As he raised the firearm to shoot Harland, a strange reflection caught his eye.

This glare was created by the steel head of the mattock that Harland had tossed aside earlier. The discarded tool was now a weapon in the hands of Alma Ojeda, who would later be known for having discovered the largest dinosaurs specimens on Earth and Mars.

The pointed end of the mattock struck the center of Quinlan’s vision. The pilot dropped the firearm and screamed, pressing his hands over the spidering crack that the mattock had created on his visor.

Within seconds the pilot dropped to his knees as glass exploded, allowing the pressurized interior of his suit to escape into the Martian atmosphere.

As the sweat on Quinlan’s forehead and the saliva on his tongue boiled, Ojeda helped Harland to his feet. Ojeda secured and aimed the emergency firearm, firing the one shot needed to end Quinlan’s misery.

Ojeda looked down at the collapsed pilot next to the fossilized Martian dinosaur.

“Concurrent life,” she said to herself.

“We need to photograph everything,” Harland observed. “If Quinlan was right about the agency, surely we’ve got to be able to contact someone else back home. The world has to know what we’ve found.”

Ojeda nodded and turned away from the dead pilot. She looked down the gentle slope of Ascraeus Mons toward the lander.

She wondered if Michael Quinlan was the first human to die on Mars. Of course, none of the previous missions had suffered a fatality on the Martian surface, but she suspected there were yet significant discoveries to be made on the Red Planet.